The Mariana Islands is a cluster of 16 islands in an arc-shaped archipelago in the Pacific Ocean, southwest of Hawaii, north of New Guinea, and east of the Philippines. Of the 16 islands, only four are populated: Saipan, Tinian, Rota, and Guam. The islands are divided politically into the Commonwealth of the Northern Mariana Islands (territory of the United States) and Guam (an unincorporated territory of the United States).

Aside from their most famous association with the Mariana Trench (the deepest spot on earth) six miles east, the Mariana Islands are beautiful tropical islands boasting turquoise waters, white sand beaches, a comfortable climate, and beautiful natural wildlife as well as an interesting juxtaposition of ancient cultural practices with modern-day influences and conveniences.

Ferdinand Magellan discovered the Mariana Islands in 1521. He landed on Guam and claimed the islands for Spain, but the Islands were not colonized until 1668 when Jesuit missionaries began to forcibly convert the native Chamorro people to Roman Catholicism. 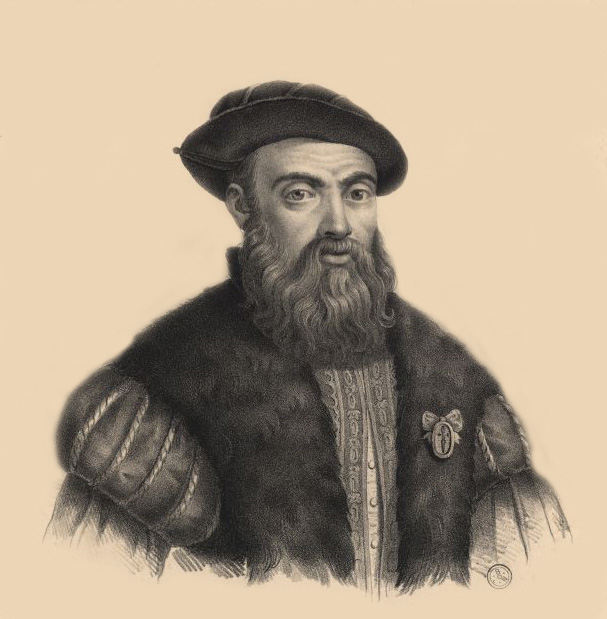 After the Spanish-American War, Guam was ceded to the United States in 1989, and the Northern Mariana Islands were sold to Germany in 1899. The Northern Marianas were invaded and occupied by Japan during World War I and seized by the United States in World War II. In 1978, the Northern Marianas chose to become a self-governing commonwealth and finally achieved this status in 1986 when a new constitution was signed. The population of the islands is descended from the native Chamorro with intermingling of Spanish, Mexican, Philippine, German, and Japanese blood.

Japanese plane being shot down as it attempted to attack USS KITKUN BAY. Near Mariana Island

The southern islands are composed of limestone, with level terraces and fringing coral reefs while the northern islands are volcanic and include active volcanoes on several of the islands. The volcano on Agrihan is the largest at 3,166 feet. On April 6, 2005, about 1,800,000 cubic feet of ash and rock were ejected from a volcano on Anatahan Island, causing a large, dark cloud to drive south over Saipan and Tinian.

The islands are tropical with little seasonal temperature variation ranging from 79 °F to 82 °F. The dry season is from December to June and the rainy season, which can include typhoons, is from July to November. Annual precipitation averages about 70 inches.

The most iconic dish of the Mariana Islands is kelaguen, a Chamorro dish eaten as a side dish or main course. Kelaguen is cooked chicken, raw shrimp, fish, or beef marinated in a pickling liquid made of lemon juice, fresh coconut, green onions, salt, and hot red chili peppers. With the exception of the cooked chicken, the acids in the picking liquid “cook” the protein in place of using heat. It is served cold or at room temperature and eaten as is, over rice, or wrapped in a tortilla. 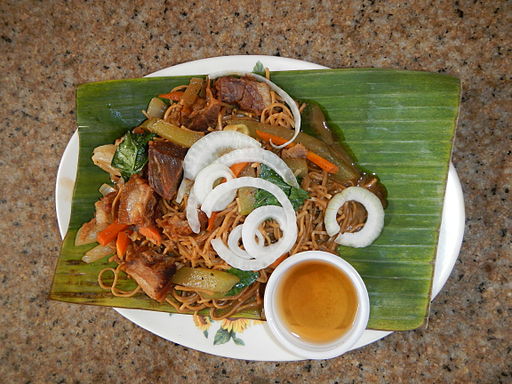 Pancit Lucban is a noodle specialty dish that is specific to Lucban, Quezon province of the Philippines

Much of the cuisine in the Mariana Islands is reflected in its tumultuous history, like appearance of the empanada which was introduced by Spain or the pancit, a noodle dish from the Philippines. Rice plays a heavy role in most dishes found in the islands, especially a red rice made with achoti which distinguishes the Mariana Islands from other Pacific island nations.

The islands depend on financial assistance from the United States. In 2013, U.S. federal grants accounted for over 35 percent of the islands’ total revenues. A small agriculture is composed of cattle ranches and small farms that produce coconut, breadfruit, tomatoes, cassava, taro, and melons on the more fertile islands.

About 25 percent of Mariana Islanders work in the tourism industry. Tourism has continued to grow on this tiny island nation with the islands making efforts to increase appeal to foreign visitors by developing casinos on Saipan.

The Mariana Islands have over 220 miles of highways, six airports, and one heliport. There is no public transportation to speak of, aside from a few shuttles from airports to hotels. There are many taxis, but most tourists are served best by renting a car while on the islands. Americans can drive in the Mariana Islands on their own licenses, and other nationalities can use their license for up to one month.

Saipan is the capital as well as the largest of the Mariana Islands (aside from Guam) and commercial center. The island was formed from a rising coral reef and therefore boosts white sand beaches. Snorkeling and diving are large tourist draws for Saipan, because the turquoise lagoon offers excellent wreck diving from ships that sank during the World Wars.

Lowtide on the Beautiful Beach Rd at Sunset on Saipan Island, CNMI

Perhaps one of Saipan’s most famous attractions is the Grotto, a 70-foot deep underwater limestone cave home to a host of marine life including turtles, coral, and reef sharks. In addition to Saipan’s natural attractions, Saipan, Guam, and many of the other Mariana Islands were important World War II battle sites. Visitors of Saipan should consider a somber visit to Banzai Cliff and Suicide Cliff where thousands of Japanese civilians jumped to their deaths during the Battle of Saipan in 1944. Countless memorials mark the site.

Tinian is Saipan’s closest neighbor, only five miles away. Tinian is the least populated of the three major islands. It’s an easy hop to Tinian from Saipan by boat or plane, which is well worth the trip. Tinian was turned into the world’s largest military airbase during World War II and is now infamous for being the take-off site for the aircraft that dropped the atomic bombs on Hiroshima and Nagasaki.

Visitors to Tinian can explore the prehistoric Taga Stones quarried over 4,000 feet from the site. Of the original 12 stones, only one remains standing due to earthquakes in the area. The Blow Hole is another interesting site, where water is propelled up to 33 feet in the air from waves entering a limestone ledge and forcing water upwards under pressure.

Impossible to not mention, Tinian is also home to a casino and Hotel called Tinian Dynasty which can be pretty fun with all your friends. 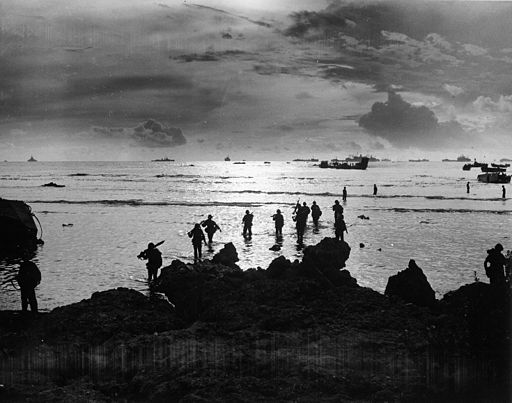 Pictured above, American invaders wade through the shallow surf to the Beach on Tinian. Navy warships are shown in the horizon.

Tinian has a rich history of action during WW2, of which many know was the point of reference from where the plane carrying the Hiroshima Bomb was launched from.

Rota draws fewer tourists than its neighbors Saipan and Tinian which means that this small island has retained a more laidback vibe.

Located south of Son Song Village, Mt. Taipingot (colloquially Wedding Cake Mountain) is one of Rota’s “postcard sites” so nicknamed for the layered appearance caused by the rocky terrain. Teteto Beach and Guata Beach are the best beaches on Rota and boost sparkling clear waters perfect for snorkelers and scuba divers. In addition to diverse natural beauty, Rota also offers tourists exciting options like a submarine tour exploring Rota’s lagoon which has fantastic coral reef formations and a wide range of tropical fish.

While Tumon Bay, the duty-free shopping destination, can feel overdeveloped for tourists looking for unspoiled island life, once visitors get away from the city, Guam offers some gorgeous beaches on level with Saipan, Tinian, and Rota. Ritidian Point, at the northern most tip of Guam, is one of Guam’s most pristine beaches as well as the site of a national wildlife refuge which protects the endangered Mariana fruit bat, Mariana crow, and Serianthes nelsonii tree.

Two Lovers Point features a gilded status of two lovers intertwined perched on the edge of a 410 foot limestone cliff. The statue is based on a legend of two young Chamorro lovers who jumped from the cliff to their deaths.

“TwoLoversPoint” by AndreasFahrrad – Own work. Licensed under CC BY-SA 3.0 via Wikimedia Commons.

The Other Mariana Islands

The Mariana Islands were formed by volcanic activity along the Mariana Trench. While the inhabited southern islands have been covered with limestone from coral reefs, the northern islands remain rocky and volcanic. The uninhabited northern islands are Farallon de Medinilla, Anatahan, Sarigan, Alamagan, Guguan, Pagan, Agrihan, Asuncion, Maug Islands, and Farallon de Parajaro. Pagan was previously inhabited but it was evacuated during a volcanic eruption in 1981.

It is very advisable for any visitors to Saipan with health problems have medical evacuation insurance should the worst arise. Saipan has one hospital known for substandard care. Nearby Guam has slightly better medical facilities. Evacuation to Hawaii in the U.S. or to their home country are other options.

The CDC recommends that in addition to having the standard recommended vaccines, that travelers to the Mariana Islands should also consider getting the Hepatitis A and Typhoid vaccines.

Your 5-Day Forecast at a Glance